A fresh honour has been added to the success feathers of servant of God and senior pastor at Omega Fire Ministries (OFM) worldwide, Apostle (Prof.) Johnson Suleman, as the Adeagbo Johnfred Adewale led JMI Foundation in France, just endowed him with the ‘2019 Ambassador Award’.

The Foundation noted for its philanthropic gesture, said it honoured Apostle Suleman for his continuous positive impact on individuals, nations and the globe at large.

According to the founder of the prestigious organisation, Suleman was particularly singled out for his exemplary lifestyle both within and outside the pulpit. 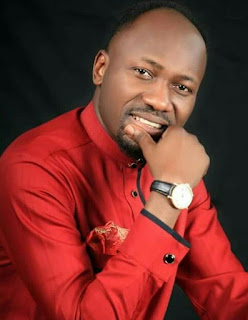 The Edo State born respected clergy has bagged several Awards of excellence from within and outside the shores of Africa.

David Oshin is a Minister of the Gospel, Online Publisher, Gospel Blogger, and an Educationist. He is very passionate about UNITY of the body of Christ.

Henotace Media is a registered faith based Media outfit based in lagos, Nigeria with an intense passion to enforce unity by publishing undiluted Gospel Content . Henotace Media hopes to remain the voice of truth in the land as such we operate with a team of independent journalists whose motivation remains undiluted Truth being shared.